This plug-in integrates JFormDesigner into Eclipse and other Eclipse based IDEs. 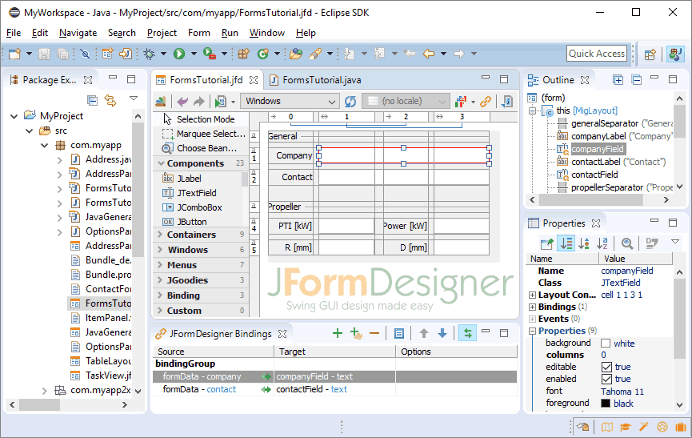 A JFormDesigner editor consists of:

To create a new form, click the New JFormDesigner Form (

) button in the Eclipse toolbar.

You can also create new forms in Eclipse's Package Explorer view. First select the destination package or folder, then invoke Eclipse's New command and select Other, which opens Eclipse's New dialog. Then choose JFormDesigner Form from the list of wizards and click Next to proceed.

In the New JFormDesigner Form dialog, enter the form name (which is also used as class name), choose a superclass, a layout manager and set localization options.

You can open existing forms the same way as opening any other file in Eclipse. Locate it in Eclipse's Package Explorer view and double-click it.

JFormDesigner adds a button to Eclipse's main toolbar that enables you to switch quickly from a JFormDesigner form editor to its Java editor and vice versa. If a form editor is active, then the button is named Go to Java code (

). If a Java editor is active, then it is named Go to JFormDesigner form (

To move the generated code out of the way, JFormDesigner folds it in the Java editor.

You can also set project specific settings in the Eclipse project dialog. Select Project > Properties from the menu to open it and then expand the node "JFormDesigner" in the tree. See Preferences for details.